Whether you work or play on the water, having the right search and rescue device is critical for your personal safety. While an EPIRB will indicate the location of the boat in the event of an emergency, AIS Man Overboard devices (MOBs) and Personal Locator Beacons (PLBs) stay with the individual to ensure their location is also tracked. Seas of Solutions is dedicated to your safety and providing information about your options to make the best choice for you, your crew and your family to improve survivability in even the most remote locations.

What is the Purpose of an AIS Man Overboard (MOB) Device?

Man Overboard devices provide immediate notification to the parent or neighbouring vessels relating to a Man Overboard (MOB) incident and provide a means of location to determine the position of the MOB. Finding a MOB in the water and navigating your vessel to their location can be difficult, particularly at night or in strong tides. A survivor recovery system which uses AIS, to contact the crew member’s vessel, greatly increases the chances of identifying the MOB’s location and aiding recovery via locally orchestrated rescue. For this reason, we have also created an EPIRB with AIS and an AIS SART.

Why should an AIS device not be referred to as a PLB?

The AIS MOB device provides real time positioning to support localised rescue by using the Automatic Identification System, an electronic navigation system established originally as a collision avoidance and safety system for commercial vessels. However, AIS MOB devices are not part of the COSPAS SARSAT dedicated emergency 406 frequency search and rescue network and therefore should not be referred to as Personal Location Beacons or PLBs.

What are the Pros and Cons of Personal Location Beacons (PLB) for MOB scenarios?

A Personal Location Beacon (PLB) is a personal safety device designed to alert search and rescue services and allow them to locate you. When activated it transmits a coded message on the 406 MHz distress frequency which is monitored by the COSPASSARSAT satellite system. The alert is then relayed
via a local user terminal (LUT) to the nearest Rescue Coordination Centre (RCC).

The national authority forwards the data to a rescuing authority. A PLB can have an internal GNSS (GPS & Galileo) receiver to pinpoint your location to within +/- 62m. Once in the area, rescue services are then able to home in on your precise location using the inbuilt 121.5 MHz homing signal.
The issues in using a 406 MHz PLB in a MOB situation are the variable latency period from activation to rescue depending on location and that vessels in the vicinity, including the Mother vessel, aren’t alerted to an MOB incident until they are contacted by shore Search and Rescue authorities, which limits opportunity for local recovery and extends the time in the water.

A 406 MHz PLB is not primarily designed as an aid to a local recovery, as its distress alerting is dependent on communication with the official SAR network whereas, a localised alert via an AIS MOB device greatly increases your chances of local identification and rescue should such support be available.

What Happens When an AIS MOB Device is activated?

Once activated the position of the AIS MOB device such as the FastFind CREW1, will be displayed as a GPS located target icon on ships in the vicinity with AIS enabled plotter screens. They do this by repeatedly transmitting an AIS message type MSG1 (class A position report) and MSG 14 (safety broadcast message) alternating quickly between both AIS channels AIS1 and AIS2.

A burst of 8 MSG1 messages repeat every 1 minute, with the cycle of messaging repeated many times to overcome wave action and to achieve line-of-sight to a nearby vessel. In a heavy sea with the AIS device close to the sea surface, wave swell can block the transmissions. This is overcome via information being repeated every 2 seconds (over 14 seconds), ensuring some transmissions will coincide with the survivor being on a wave crest, allowing “line-of–site” path for message relay. The vessel will get a range and bearing to the exact location, which is updated, in real time to recover
the drifting MOB.

What is the difference in search and rescue solutions between a MOB incident and a vessel in distress?

Localised rescue supported by an AIS MOB device offers the most effective solution to recovering an individual involved in a man overboard incident, as it reduces time in the water and fatalities. When an incident involves a vessel in distress, rather than a MOB incident, localised rescue is not necessarily an option but there is an extensive range of search and rescue solutions available, particularly with GMDSS mandated equipment for commercial vessels.

The primary tool in a vessel incident is the Emergency Position Indicating Radio Beacons (EPIRBs) on the vessel bulkhead, which when activated transmits a message on the 406 MHz distress frequency which is monitored by the COSPAS-SARSAT satellite system. The alert is then relayed via an earth station to the nearest Rescue Coordination Centre (RCC). For the crew in the water or life-raft 406 MHz PLBs act as personal EPIRBs and broadcast their position to the rescue authorities. Search And Rescue Transponder (SART) are an AIS based emergency transmitter that is designed to be used in conjunction with life rafts in the event that it is necessary to abandon ship. Finally, GMDSS mandated VHF radios provide an additional emergency communication channel. 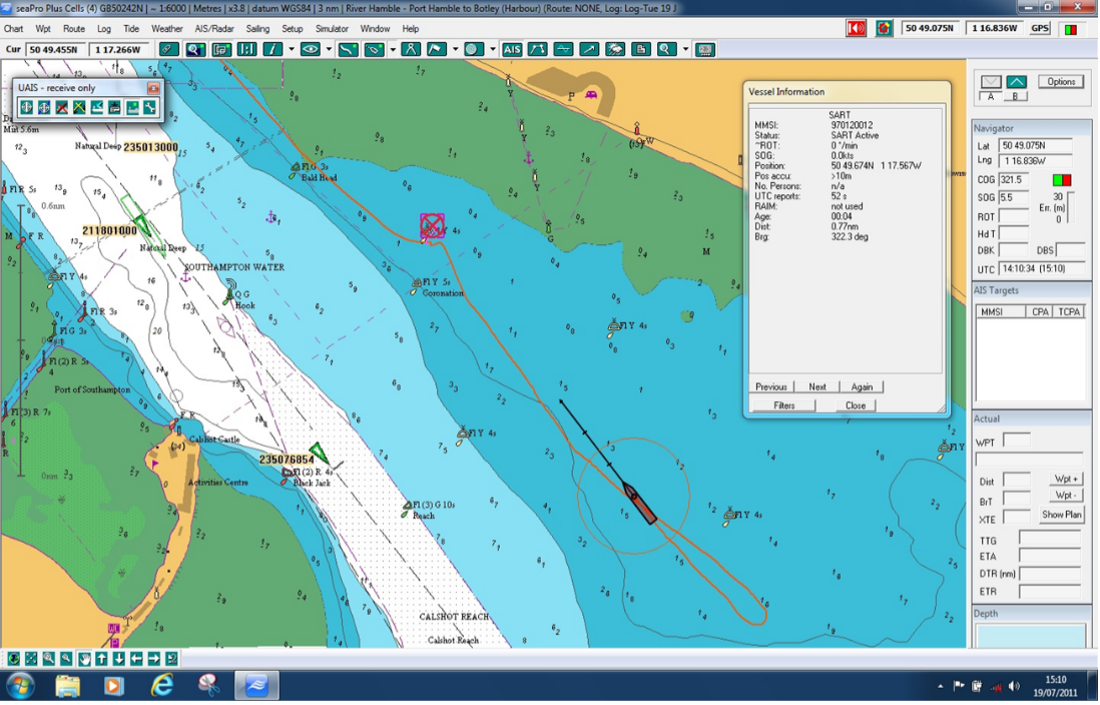 MOB incident results in activation of AIS MOB device, which transmit a localised locating signal on maritime VHF frequencies to a range of 4 miles (approx). The AIS MOB position is sent 8 times per minute, using an ‘impolite AIS protocol’ ensuring the AIS MOB message is given priority. The signal is displayed on plotter screens on vessels within the broadcast radius. The AIS message content includes the unit ID number, GPS position fix data and a simple text message, to highlight the MOB incident and provide all the information required to support a localised rescue.

AIS (Automatic Identification System) has been one of the most important innovations in navigation since the introduction of GPS. It is one of the fastest-growing segments of the electronic navigation business in recent years, with at least 170 countries mandating its use. Providing a tool for improved safety and collision avoidance, AIS is currently mandated on all commercial vessels over 300 tonnes and the EU Fishing mandate for AIS and market sizes states that EU Fishing vessels will gradually need to be equipped with Class A AIS. The development of collision avoidance AIS ensures AIS MOB is an effective complementary localised rescue solution alongside the dedicated 406 Cospas-Sarsat Search & Rescue ecosystem. From July1st 2022, new IMO regulations will require SOLAS vessels to gradually switch to EPIRBs that include AIS. Initially that will be mostly for new builds, but over the next few years as safety systems are replaced AIS EPIRBs will become the norm because of the advantage they offer in localised rescue.

Why did Seas Of Solutions develop a non 406 Mhz search and rescue device?

Time is often the most important factor in rescue operations and so that more effective, faster rescues could be undertaken locally, significantly reducing the likelihood of death or injury, Seas Of Solutions developed its’ AIS MOB products. The FastFind CREW1 AIS MOB Beacon has been specifically designed as a personal AIS locating devices to efficiently locate and retrieve a missing crew member.

How does the FastFind CREW1 AIS MOB device interact with AIS navigation plotters?

The FastFind CREW1 is activated in an emergency crew recovery situation. The alert message is transmitted to all AIS receivers and AIS enabled chart plotters within a 4-mile radius (typical) and an AIS SART MOB icon normally marks the survivor’s location. The precise target survivor information including GPS position becomes viewable when the chart plotter cursor is positioned over the icon, highlighting exact location, distance and bearing to locate person(s) in need of assistance.

Is AIS a standalone rescue solution?

Like all marine safety and search and rescue solutions, their impact is greatest when supported with in-depth training and practiced procedures and in combination or integration complementary products. A strong example of the benefits of a ‘combination’ approach in an MOB incident, is the 2014 Clipper Race MOB rescue on board the Derry~Londonderry~Doire, credited to a
Henri Lloyd dry suit insulating the MOB, an automatically deployed Lifejacket and the manually operated AIS MOB plotter information, which facilitated retrieval by providing real time bearing in very heavy seas.

What tool is most effective for solo sailors?

In a scenario where a MOB was sailing single handed with limited availability of localised support at the time of an incident, the most reliable tool to raise the alarm and seek outside assistance would be the use of a 406 Mhz PLB with GPS and Galileo receivers, such as the FastFind 220 or FastFind Return Link. The PLB effectively acts as the MOBs direct line to the coastguard via the Cospas-Sarsat network, ensuring SAR services know the owners’ details from their PLB registration and the location of the incident via the GPS/Galileo enabled message. With the 2021 introduction of the Return Link service PLBs can also act as two-way communication signals, offering invaluable reassurance signals to sailors in distress to let them know their situation and location are known by search and rescue authorities.